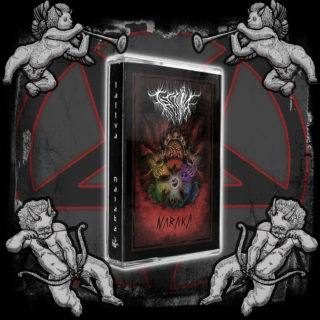 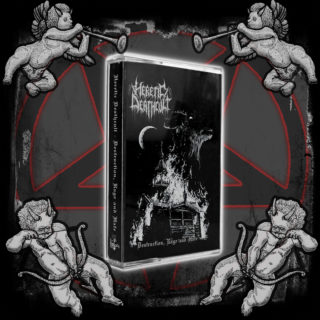 Heretic Deathcult, the pulsating phallus of blasphemous battering penetrates your ears and soul with crushing Black fucking Metal brutality.
The two warheads, known from Bands like Ungod, Goatthroat, Thore, Ruins Of Unlight and more, unleash 2 new songs plus a Cover of an old Vargsang song. In addition to these demonic vomits, the tape comes with 2 tracks from the demo as well as 4 songs from the split with far eastern masters of perversion Abigail.
This is for those who want bestial speed with a sound that eclipses the sun and raw demonic chants that will reoccur in your nightmares.
Destruction, Rage And Hate will fornicate your feeble hearts with the strength of an infernal goat cock!!!

Bad Karma Black Metal from France leading you through the pain of rebirth with a solid sound of darkness and demonic chants deriving from the torture of life’s ever spinning wheel. Heavy, dark, fast and raw yet sophisticated enough to give you a glimpse of the metaphysics of the circle of existence embodied in sombre obscure karmic melodies that haunt from the speakers here and there